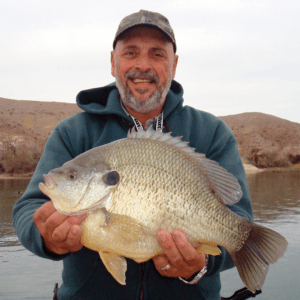 A mystery remains: Redear sunfish at Havasu have been reaching world record sizes. But why, exactly? Let’s dive into this piscatory puzzle.

We’re at the time of year when Lake Havasu tacked its world-record pin on the fishing map. On Feb. 16, 2014, Hector Brito caught a 17-inch, 5.78-pound world-record redear sunfish on a dropshot-rigged nightcrawler. “I didn’t expect the record to last this long,” Brito said. “It’s amazing.”

This 45-mile fishing wonderland created by the Colorado River on the western-most strip of Arizona, adorned like a leather belt by the regal London Bridge, allows an angler to fish from the beach on the Arizona side and see the California mountains on the other. Some of those anglers said they witnessed a dramatic increase in the sizes of redear sunfish from 2009-2014 that — coincidence or not — occurred after invasive quagga mussels were first discovered in 2007 at Havasu.

In 2014, the U.S. Bureau of Reclamation (BOR) did a study about the effects of redear and bluegill on quagga populations and found these sunfish do consume quaggas. Even more, the redear reduced quagga numbers by as much as 25 percent. The experiments of the study were conducted in field enclosures of Lake Havasu, as well as in the BOR’s Boulder City, Nev. Fish Lab. See the updated report.

The Arizona Game and Fish Department can’t verify that redear sunfish, also known as “shellcrackers” because of their pharyngeal teeth (throat teeth) that allow them to crush crustaceans such as snails, are reaching unprecedented sizes due solely to quaggas as an additional food source. Other biological factors include Havasu’s food base of grass shrimp and redswamp crawdads.

Regardless, Havasu is home to some of the biggest shellcrackers on the globe. Doug Adams, a former Lake Havasu City-based fisheries biologist for the Bureau of Land Management, said he also knows that redear sunfish eat quagga mussels. At the same time, he said that in 2005 —  two years before quagga mussels were discovered in Lake Havasu – an electroshocking of 75 sites produced redear sunfish that averaged more than two pounds.

“From one standpoint, there wasn’t much fishing pressure until they started catching these bigger (redear),” Adams said. “Quagga could be a good contributor to their sizes. So it’s kind of a mystery.” A mystery it might remain.

Still, some Arizona anglers have etched their conclusion: The increasingly larger sizes of redear is a quagga-based phenomenon.