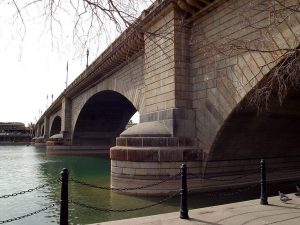 Lake Havasu, on the Colorado River between California and Arizona, is one of the most popular lakes in the west for outdoor recreation of all kinds.  People from both sides of the river flock there not only to fish, but also to ski, jet ski, sail, or just lie on the beach and catch some rays.  Lake Havasu City is located right on the shore of the lake, and the resorts, restaurants, and shops of the city add to the allure of the area.

Another big attraction, which draws people from all over the world, is the London Bridge, which was brought to Lake Havasu City stone by stone and rebuilt on the lake in 1971.  The shops, boutiques, and restaurants that sprang up around the bridge have something for everyone — from elegant European-style dining to hot dog stands.

“If you find a fish on Havasu, it’s almost guaranteed to eat,” states Dean Farrell, an Arizona tournament fisherman.  Dean likes to fish the north end of the lake, in the Colorado River.  “If the river bite is going,” he declares, “that’s where tournaments are won.”   The fish that live in the river are bigger and stronger from dealing with the current all the time, he explains.  The river is good fishing off and on all year, and especially good when the water is up.

When we were at Havasu with Dean, we started fishing rocky banks in the Colorado, throwing crankbaits and spinnerbaits along the shore and following up with jigs and worms.  “Good colors here are anything with red on it, along with white and pink for plugs and spinnerbaits,” Dean says, and he prefers darker colors for worms and jigs.

Farrell keeps a 6″ purple and red Double D hand-poured worm tied on at all times, on light line.  When a bass comes out of the tules and hits his jig or spinnerbait without taking it, he tosses the little worm in.  At Havasu, almost all the fishing is sight fishing.  You can see the bass down in the water, and the trick is to get them to take a lure without scaring them away.

The whole lake has good weedbeds until the cold weather causes them to die off.  Early in the year the weeds start to grow, and they sometimes get so thick that they block access to the backwaters by late summer.  These weedbeds are good places to throw a crankbait, especially in warmer weather.  Topwater lures fished over the weeds in summer are dynamite.

One of the most popular topwater lures at Havasu is the Sammy.  This is a Japanese lure that is almost impossible to obtain, but the locals have discovered that the Fenwick Methods Darting Bait is almost identical, and does the job just as well.  This bait is fished with a “walk the dog” motion over weedbeds with explosive results.

In the spring, the backs of coves and the pockets in the rivers provide some of the best fishing.  Sight fishing with Gitzits, and throwing buzzbaits or topwater plugs over weeds are two of the best producers.  Jerkbaits on secondary points produce well, too, and so do Rat-L-Traps, spinnerbaits, and shad-colored Slug-Gos.

Flipping or pitching to the tules is good almost all year long, and the trick is to find the most productive spots.  Anglers are loath to show you their favorite stretches, because in some cases they’ve spent years locating these good pieces of shoreline.

The tules stretch out along the shore forever, and one way to find the places that hold fish is to throw a spinnerbait or crankbait along the edges and watch for fish to come out.  If you see a fish, or get bit and miss it, stick around and fish the tules very thoroughly with a worm or a jig.

Farrell and most of the locals avoid fishing Havasu during the summer, especially on weekends.  This is the height of the tourist season, and the lake is unbelievably busy.  “You can almost walk from boat to boat,” states Farrell.  California and Arizona residents swarm to the lake to see and be seen, and the lagoon that goes under the London Bridge is absolutely packed with boats and sunbathers.

Weekdays during the summer are not as crowded, and anglers can boat some bass by getting on the water early to throw jigs and topwater lures along steep rock banks.  Deeper grassbeds will also hold fish in summer, and jigs, deep-diving crankbaits, and split-shotting are a few of the techniques that will get them to bite.

Summer is also the height of the striper season, and each year there is a huge striper tournament at Havasu that draws thousands of people.  Bass anglers can expect to catch quite a few stripers on their quest for largemouth bass, and the stripers will give you quite a ride for your money.

Fall starts around October at Havasu, and Farrell’s number one choice of lure for fall is a buzzbait.  He’ll throw a buzzbait all day long in the fall, along with rip baits, topwater plugs, and flipping in the Colorado.  A lot depends on the level of the water.  If the water is high, he’ll head for the river every time.  If not, he’ll stick to the main lake area.

The backwater areas in the Colorado are some of his favorite spots, and in fall they can be difficult to reach.  Narrow trails through the tules lead to beautiful pools that are invisible from the river channel, and these quieter pockets sometimes hold the biggest fish on the lake.  When the water is down, reaching these pools is either very difficult or impossible.

Dean took us back into one of these lovely pools, and we almost didn’t make it.  The prop was literally plowing the mud, and at the halfway point we bogged down.  It was impossible to turn the boat, so we completed our trek to the pool by lurches and bumps, with two of us as far up on the bow as we could get, to keep the prop as high as possible.  Havasu — it’s not just fishing, it’s an adventure!

Once we got back in there, it was incredibly beautiful.  As we lunged past the edge of the tules into the open backwater area, a three-pound bass swam off next to the boat.  Steep red walls and the thick tules turned this little pond into a peaceful, shady spot that seemed like another world.

Even the boats cruising past us down the river channel were invisible and sounded miles away.  The pool held several good bass, and Dean fished the whole area thoroughly with spinnerbaits, jigs, and worms.