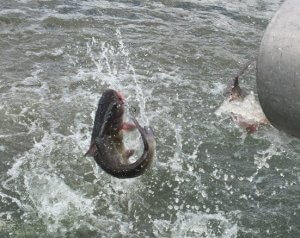 The “whiskers” are harmless to touch and used only to smell, taste and feel as it forages for food. However, the dorsal fin and pectoral fins have a sharp spine which can inflict a painful wound. In rivers, fishing swift riffles at night with light tackle for these fish can provide some superior sport fishing. Most actively feed in evenings.  The meat is white, firm, tender and sweet and is considered very good eating.

Bartlett Lake is known for its big catfish.  A record-setting 74-pound flathead catfish was pulled from the lake in 2013.  Channel Catfish in the 25-pound range are not uncommon. The north shore of Bartlett Lake has deep areas that are often good. Big cats also head upstream toward the mouth of the Verde River from March to May, making them easy to find and catch at this time of year. Natural baits are best for catfish.

According to Nick Walter in an Arizona Game And Fish Department article published March 28, 2018 Bartlett Lake is about to be a hot spot for flathead catfish as they move in shallow and begin to roam and feed during their spawn.  “They just move a lot during their spawn and feed on about everything,” “guide ‘Flathead’ Ed Wilcoxson said. “It’s a good time to catch fish.”

In another Margie Anderson article AZ Lakes, AZ Pros: Dan Marzano says November and December are the best months for crappie fishing, according to Dan, and the monsoon season is best for catfish.  Bass fishing, like bass fishing everywhere, is just about as good as the bass fisherman, but Patagonia offers opportunities for anglers at all skill levels, with beautiful scenery thrown in free of charge.

Another great article on Arizona Lakes is A Small Wonder: Mittry Lake.

Or, read about the Flagstaff man who set a 30-year-old Catfish state record.