Mittry Lake is an awesome little body of water off the Colorado River near Yuma. It doesn’t get a lot of pressure because you can’t get to it from the river. It often gets passed over in favor of the larger and more popular lakes nearby – Imperial Reservoir and Martinez Lake.

Although it covers only about 750 acres and is barely 10 feet deep at most, Mittry’s weeds and channels provide excellent habitat for lots of fish.

Mittry is closed to skiing, and there is only one boat-launching ramp, but it is a very nice concrete ramp with ample parking across the road. There is also an abundance of good places for shore fishermen, with pull-offs and parking all along the eastern shore.

A barrier-free fishing jetty also makes it easy for handicapped anglers to pull in some nice fish. In fact, Wayne Gunter of the Arizona Game and Fish Department tells me that the jetty is actually right over the best spawning grounds in the lake.

We went to Mittry Lake with Gary Key, who grew up in Yuma and has spent a lot of time on Mittry. His favorite lures for the lake include topwater frogs, shallow-running crankbaits, worms, jigs and spinnerbaits.

Key watches the graph and the vegetation to determine changes in depth and bottom composition. Places where change takes place will often hold bass. He pitches lures to the tules and into pockets, but he also throws to the center of the channel and works the baits back. We caught a lot of nice bass on jigs and worms.

Even though the lake is small, it feels bigger because of the twists and turns. You can fish for quite a while without seeing anyone else. If you are a shore or float-tube fisherman, this lake is ideal. 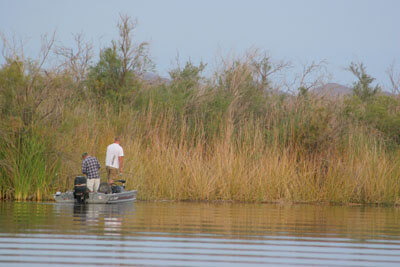 There are plenty of places to park or camp along the shore and you can put a tube, kayak, or small boat in right next to your campsite. The area around the lake is fun to explore, too. Make sure you check out the road south of the lake – you’ll see old structures and lots of cool stuff.

There is no motor limit on Mittry. The road in is paved on the south end, but the pavement ends right as you get to the lake. The lake itself is almost hidden by the thick salt cedars and reeds that grow all along the banks, but there are a bunch of places with parking and well-used paths to the shore all along the east side of the lake.

Mittry is in the middle of some of the best dove and duck hunting you’ll find anywhere. Part of the north end of the lake is closed during duck season, but hunting is allowed in other areas. There are no stores at the lake, so bring your own provisions. There is a restroom in the parking area at the launch ramp.

Camping is allowed at the lake, and in addition to the largemouth and flatheads there are channel catfish, sunfish, carp, and bullheads in the lake. At an elevation of only 185 feet, it gets hot at Mittry in summer. There are no fees for fishing or camping, and the Arizona Game and Fish Department says that you do not need a Colorado River Stamp to fish at Mittry.

You can get to Mittry Lake from Highway 95 by taking the Imperial Dam road through the Yuma Proving grounds (turn west at the big guns) or by taking the Laguna Dam Road from the south on 95 near Yuma.

From the south, you can get to 95 from Interstate 8 by turning north at exit 9. Once you get to 95 (it’s just a couple of miles north), go west to Laguna Dam Road. There is a Circle K on one corner and a Chevron station on the other corner.

There is a small, brown sign saying, “Mittry Lake” just before the turn. Stay on Laguna Dam Road, and it takes you right to Mittry Lake. You will get to Betty’s Kitchen Wildlife and Interpretive Area, and the lake is just past that.

If you are coming south from I-10, take 95 south all the way to the Imperial Dam Road. This goes right through the Yuma Proving Grounds, and you actually turn west onto the road flanked by two huge guns.

You’ll drive past a display of tanks and howitzers. When you reach the sign that says you are leaving the proving grounds, keep your eyes open. There is a canal that runs under the road just past the end of the proving grounds. On the west bank of this canal is a dirt road with big steel posts on either side. A gate stands open there.

This is the road to Mittry Lake, and it runs right along the canal all the way to the lake. It wasn’t marked when we were last there. Turn south on this canal road and within a mile or so, you should see a sign proclaiming that you are in the Mittry Lake Wildlife Area. A couple more miles will have you at the lake.

For information and fishing reports on Mittry Lake, you can call the Arizona Game and Fish Department, Region IV, at (928) 342-0091.