The Christmas season is made just a little more special each year by three of our favorite Southwest lighted-boat parades.

Up To 50 Boats Will Delight Spectators 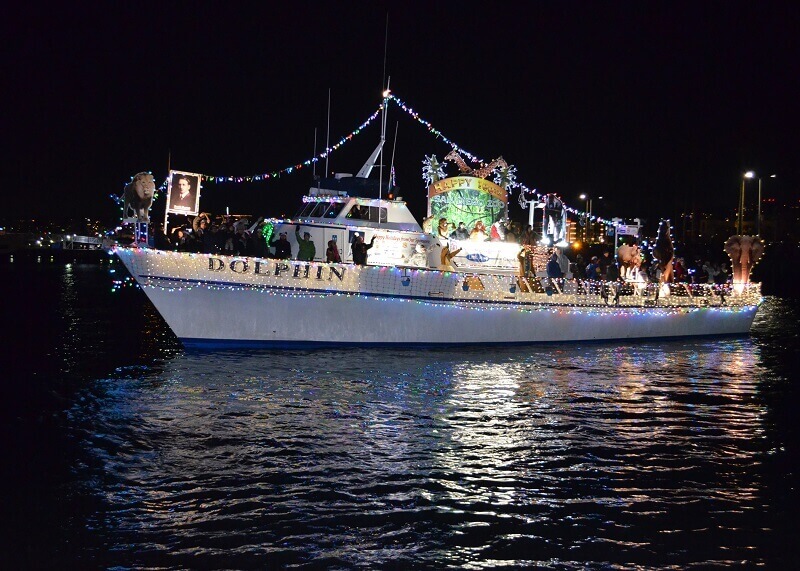 Up to 50 boats brightly decorated in their holiday best will delight children and adults alike. Watch the boats cruise through the Bridgewater Channel beginning in Thompson Bay and continuing under the London Bridge to the north end of the Channel, with a turnaround at Windsor Beach and back.

Bundle up and take a stroll through the Channel — the only time you’ll see the Channel packed full of boats and boaters in winter gear at night. Come cozy up with family and friends and create treasured memories of a favorite holiday tradition!

Boat parade participants and sponsors invite you to visit the docks in front of the London Bridge Resort where parade floats will be lit up nightly beginning at dusk.

Bonfires will be permitted throughout the Channel on the island-side beach areas but must be contained in a portable, self-contained fire pit. All ashes must be removed entirely and the area left clean. Absolutely no digging of fire pits in the sand and no dumping of ashes in the water. The area will be patrolled throughout the evening. (Bon fires are not permitted on the new white-sand beaches at the north end of the channel.)

There will be great viewing at the Nautical Beachfront Resort (the starting point of the Parade of Lights), Rotary Beach, throughout the Channel on both sides between Rotary Beach and Windsor Beach, the English Village, across the London Bridge, and at any of the restaurants along the Channel.*

*If you plan on watching from the Channel restaurants, early reservations are recommended.

There is no charge to view The 35th Annual Boat Parade. Plenty of free parking is available at the English Village and in the parking areas on the island near the Channel. Plan to get there early as traffic around the London Bridge can become congested.

2017 Fantasy Of Lights Boat Parade Will Dazzle The Crowd

Light up the night and be dazzled at the Valley’s most unique holiday event, the 2017 Fantasy of Lights Boat Parade presented by SRP at Tempe Town Lake. The Boat Parade will feature as many as 50 festively lighted boats of all sizes.

After dark, more than a thousand luminaria will illuminate the sidewalks and paths of Tempe Beach Park, a special display provided by Tempe South Rotary.

One of San Diego’s most popular holiday events is scheduled for two December Sundays, the 10th and the 17th. Recently, the San Diego Bay Parade of Lights announced the theme for this year’s holiday boat parade: “Arrgh! A Pirate’s Christmas.” This year marks the 46th anniversary for the Parade of Lights.

“The San Diego Bay Parade of Lights gives boat enthusiasts and owners an opportunity to demonstrate their creativity in a fun way and we can’t wait to see what they come up with to celebrate a pirate’s Christmas this year,” said Parade Chairman Larry Baumann. “I’m sure the thousands of spectators who visit the bay to view the dazzling lighted boats will get a kick out of this year’s theme.”

Presented by the Port of San Diego, the San Diego Bay Parade of Lights brings more than 100,000 San Diego residents and visitors to the San Diego Bay waterfront each year. The procession of about 80 lavishly decorated boats has become one of our region’s most iconic holiday events.

The parade route starts at Shelter Island and travels west past Harbor Island, then south along the Embarcadero, Seaport Village, and Cesar Chavez Park before turning parallel with the Coronado Bridge to the west side of the bay. The parade then proceeds past Peohe’s to the finish line in front of the Ferry Landing. It takes about two hours to complete the trip and there are many comfortable waterfront viewpoints along the route.

A variety of prizes and awards are presented to the best decorated boats and those that best capture the parade’s theme. All participants will receive a participant plaque and are invited to the awards dinner held at Tom Ham’s Lighthouse.

Those interested in sponsoring the San Diego Bay Parade of Lights, can contact Joni Geis at (619) 823-5220 or joni@boatlenderusa.com.

San Diego Bay Parade of Lights is sponsored by the Port of San Diego’s Tidelands Activation Program, designed to bring our dynamic waterfront alive with events that engage the community and inspire visitors to enjoy San Diego Bay.