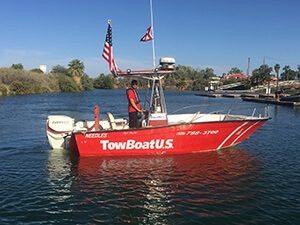 On the Colorado River at the remote corner of Nevada, Arizona and California, when a boat breaks down, runs aground, runs out of fuel, or needs a tow to the launch ramp, TowBoatUS Needles is ready to help 24-hours a day. The new owner of the on-water towing and assistance service, Capt. Justin Wilde, found his way to the recreational boat-towing business after boating on the Colorado River his whole life and a stint in the U.S. Navy.

“With five years of experience in the Navy on the harbor patrol team, operating vessels in all sorts of conditions comes natural to me,” said Wilde. “When I got out of the military, I wanted to continue my passion for boating so I began working with Greg Ewing, the previous owner of TowBoatUS Needles, helping out on towing and salvage jobs to learn the business.”

Much like an auto club for boaters, BoatUS offers on-water Unlimited Towing Memberships for freshwater boaters and anglers for just $72 per year. Boaters without BoatUS towing services face costs that average $750 per towing incident, with some paying into the thousands out of pocket.

With a mix of both new and seasoned boaters on this section of the Colorado River, Wilde is prepared to see the abundance of on-water activity this summer. However, he offered that even the most experienced of boaters sometimes run into issues on this waterway. “You really have to know the river this time of year,” he said. “There are a lot of rock bars, and the farther north you get toward Davis Dam, the quicker and more often the water fluctuates. If you don’t pay attention to the water release levels, you can easily get caught and hit bottom.”

Wilde, who is U.S. Coast Guard licensed, also maintains an excellent relationship with local law enforcement. “We have a great working relationship with a common goal to help get boaters home safely,” explained Wilde.

TowBoatUS Needles operates a 21-foot center-console response boat with single engine outboards ready 24/7 to service boaters between the I-40 bridge at Topock, north to Davis Dam. The company also keeps a 19-foot center-console as backup in case of high demand. Both response vessels are home ported at Needles Marina and are easily recognizable by their red hulls with TowBoatUS logos emblazoned in bright white letters on their sides. They are rigged and ready for towing, jump starts, fuel delivery, and soft ungroundings. The company also offers salvage and recovery services.