Youth At Its Best 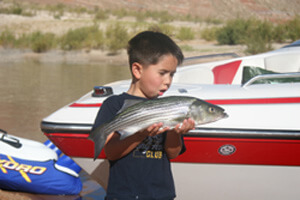 Ryan Chamberlain, 5-yr-old from La Palma CA, caught his first striper using a krocodile spoon jigged in 50 feet of water in Padre Bay. This was the first trip to Lake Powell for the family and the first striper caught using information gleaned from the fishing website, Wayneswords.com.
Lake Powell Fish Report
By: Wayne Gustaveson

The good news is that water temperature is falling which will lead to a fall feeding frenzy. But right now the temperature has not gone down enough to change recent fish behavior significantly. Here is a rundown by species.

Striped bass adults are holding in large schools below the thermocline (40 feet or deeper). They are very anxious to eat and will light up at the drop of a spoon or a bait chum shower. Graph to find striper schools resting on the bottom. They will usually be in the submerged creek channel, or near the terminal end of a steep cliff wall. When the bait or lure is offered, individual fish rise in the water column followed by the entire school hoping to feed on the limited offering presented to them. When switched to feeding mode, school mates will come all the way to the surface following hooked fish or chasing bait. When the school loses interest it will go back to the bottom near the original site where it can be relocated later in the day or on another day. These resting schools tend to stay in the same place for a long time making them easy targets for return fishing opportunities.

Juvenile stripers are near shore and in the backs of canyons where shad are hiding in brush and off-colored water. They are seen chasing along the surface occasionally but the best catching lures are shallow running crankbaits or small spoons. Occasionally a school of shad ventures too far from brushy cover where it is attacked by small stripers and even the adults who will come up quickly from depth to join the feeding opportunity. Boils still happen but are not common. If no shad are found juvenile stripers revert to eating plankton and suspended in the upper 20 feet of water where plankton is more concentrated. They are susceptible to trolling to locate schools.

There are evening striper boils occurring near Hite and the San Juan inflow during calm weather conditions. Wind can spoil the boil party but the inflow is the best location to find top water fishing opportunities.

Largemouth bass are found in brushy locations, most likely at a depth of 15-27 feet. The deepest brush is rooted at 27 feet at the current water level. Largemouth will not abandon the cover unless something better is found. Some weed beds are now appearing while old tamarisk tree cover is decomposing. A combination of weeds and thick cover would be the most likely spot to find largemouth.

Water temperature and cover, including brush and rocks, are the key elements needed to find smallmouth bass. The magic depth is 25 feet when looking for adult bass. Keep the bait in that zone to maximize bass catch.

Walleye are still hanging in the tree tops from 15-25 feet trying to find sunfish or shad. Trolling the tree tops with a lure diving just deep enough to tick the tree tops is an effective walleye technique. Perhaps more walleye are lying on the bottom in with the striper schools guarding the submerged creek channels hoping to participate in a shad feeding event. One of every 10-20 fish caught on spoons from 40-60 feet turns out to be a walleye.

Catfish and sunfish are close to shore near camp spots where a boat can beach. Fishing is good and weather is great.

On Saturday July 31, 2010, 170 young anglers competed in the 8th Annual Young Anglers Tournament held at the Shelter Island Pier on San Diego Bay. An incoming tide which crested at 1:15 pm contributed to a day which saw a quantity of qualifying catches including halibut, bass and mackerel. (Pictured above are John Campbell, the winner Isaac Norfolk & IGFA Trustee, Mike Farrior)

Anglers were invited to use their own gear or use rod & reel combos provided by Okuma Fishing Tackle. Winners were awarded in each of ten age categories based on a point system valuing the number of fish and species caught. Catch and release was encouraged.

The winners in each age category were:

The overall winner of the day’s tournament was 15 year old Isaac Norfolk of Chula Vista, whose score was 26 points. His name will be engraved on the Young Anglers Perpetual Trophy which remains on display at the pier.

A lunch of hot dogs and Tommy Gomes’ famous fish tacos was provided to participating anglers and their families by Stumps Village Market of Rancho Santa Fe, Specialty Produce and Catalina Offshore Products. A free drawing delivered prizes to all participating anglers making every young angler a winner. 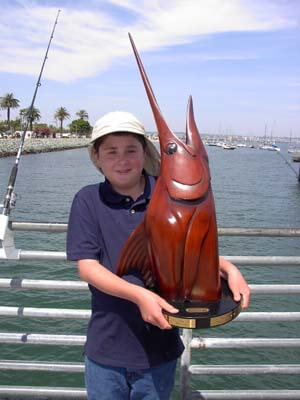 Thomas caught and released 12 California Lizardfish during the three hour tournament in which over 160 kids ages 6-15 participated.

TEACHER: John, why are you doing your math multiplication on the floor?
JOHN: You told me to do it without using tables.

TEACHER: Donald, what is the chemical formula for water?
DONALD: H I J K L M N O.
TEACHER: What are you talking about?
DONALD: Yesterday you said it’s H to O.

TEACHER: Winnie, name one important thing we have today that we didn’t have ten years ago.
WINNIE: Me!

TEACHER: Glen, why do you always get so dirty?
GLEN: Well, I’m a lot closer to the ground than you are.

TEACHER: George Washington not only chopped down his father’s cherry tree, but also admitted it. Now, Louie, do you know why his father didn’t punish him?
LOUIS: Because George still had the axe in his hand.

TEACHER: Now, Simon , tell me frankly, do you say prayers before eating?
SIMON: No sir, I don’t have to, my Mom is a good cook.

TEACHER: Clyde, your composition on ‘My Dog’ is exactly the same as your brother’s. Did you copy his?
CLYDE: No, sir. It’s the same dog.

TEACHER: Harold, what do you call a person who keeps on talking when people are no longer interested?
HAROLD: A teacher.

This was Jennifer’s first year of competition in the Bassmaster Casting Kids program.

She won her Casting Kids division in the fall, and was asked to return and compete for the Arizona state title at Cabel’s in Glendale.

Jennifer, 9, was tied at the end of the regulation casting tournament play. The three Bassmaster judges called for an immediate “winner takes-all cast-off,” where each competitor was to cast from three different distances and the first to score the highest point was to be declared the winner.

After a second tie, Jennifer won the competition. She won an all-expenses -aid trip to represent Arizona in the Bassmaster National finals in Washington state in May.