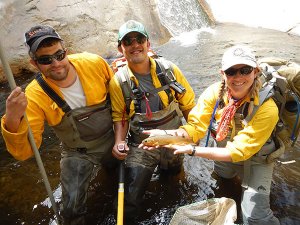 Hiking steep trails wearing full fire gear Wednesday and Thursday, and often with backpacks holding aerated buckets of fish and other gear, the rescue team salvaged fish from two populations of Gila trout from the ash-blanketed slopes of Mount Graham.

The rescue came just before monsoon season when summer rains are likely to send ash flows toxic to fish down waterways following high-density wildfires such as the Frye fire.

One Of Two Native Trout Species

Gila trout, listed as threatened under the Endangered Species Act, are one of two native trout species in Arizona, along with the Apache trout.

“Populations restored in isolated headwaters are unfortunately vulnerable to the risk of post-fire flooding, making our salvage efforts critical,” said Tracy Stephens, AZGFD native trout and chub coordinator. “We could not have done this without the efforts of the Type-2 Incident Command Team, including USFS and BLM personnel from throughout the Southwest Region that coordinated our efforts and ensured our safety.”

In 2012, the nearly 300,000-acre Whitewater Baldy Fire – the largest fire in the history of New Mexico — burned through nearly half of the existing Gila trout streams and fish were eliminated from six of the eight streams that were within the burn area. Gila trout were evacuated from three streams following the fire, including Spruce Creek.

Those fish from Spruce Creek were transported to Ash Creek, where last week they once again were salvaged.

The South Diamond Creek lineage of Gila trout were introduced into Frye Creek beginning in 2009, and this wild population was the first to open to catch-and-release angling for Gila trout in recent Arizona history.

All Gila trout rescued last week are being held at Mora National Fish Hatchery. The fish from Frye Creek will be used to supplement the South Diamond brood stock. The fish from Ash Creek will be held at the hatchery until an alternative stream is identified, or if conditions in the creek are deemed suitable for the fish following post-monsoon evaluations.