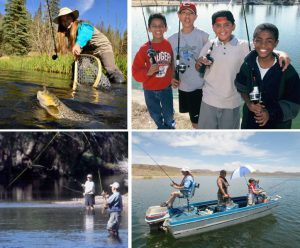 For each edition of the Fishing Report, we’ll select some photos and reports submitted by members of the angling public either through the Fish AZ Facebook Group or through the bfishing@azgfd.gov email address. If you’d like your photo/report considered for publication here, please indicate the species, place, date, name (we only publish first name and last initial), and any other information you’d like to provide. For more photos (including new photos each day), visit the Fish AZ Facebook Group.

At Bartlett Lake last weekend, Jason S. Said, “Best way to have a good morning fishing is to forget your phone. Caught 20 in 2-1/2 hours and went through all my chartreuse swim baits. Got lucky and caught a big one (4.1 pounds) in front of someone that took a pic and sent it to me.”

At Woods Canyon Lake on the Rim, trout have become active. Try worms or PowerBait for rainbows. For tiger trout, try rooster tails or small swimbaits. Reports from anglers have been mixed.

At Lees Ferry, John B. reports he caught four browns and 25 rainbows over the weekend. He had success on black and gold Panther Martins with barbless hooks, fished deep.

At Lake Powell, Wayne Gustaveson (www.wayneswords.com) reported he tried to duplicate the great fishing from a prior week, but pointed out that fishing trips are always different. What worked last week wasn’t working well this week. The only way to find success is to try as many spots as possible and change techniques until the fish respond.

Last week, he and his fishing party found a large cove, shaded by a high wall with a shallow rocky ridge extended out into the bay, and the fish responded immediately to the crappie jig. Small schools of stripers, mostly one and two-year-old schooling fish, showed up on the graph and really liked the crappie jig. If the jig was cast close to the school, the stripers responded immediately.

Smallmouth bass were just as active as stripers, and the anglers hooked almost as many bass as stripers using the same crappie jig along the same rocky ridge.

At Show Low Lake over the holiday weekend, Anthony B. had success catching trout that were biting on night crawlers fished from shore. Caught one 15-inch, 1.9-pound rainbow, also one 13.5 inches and 1.2 pounds.

AZGFD hatcheries are actively stocking most of the reservoirs in the Williams and Flagstaff areas and streams within the Verde Valley. This is the time of year when fishing for trout starts to slow down and fishing for bass, bluegill, crappie, and catfish starts to heat up. Campgrounds on the Coconino and Kaibab National Forests are now open.

Stay informed re: the stages of fire restriction where you plan to fish. The Ponderosa Pine trees are producing a lot of yellow pollen that is accumulating on the surface and along the shoreline of many of the area lakes. The pollen is completely harmless to the fish. Here are reports from some of the area lakes:

At Kaibab Lake, fishing has been good for trout on PowerBait, worms, small lures and flies. The water is very turbid (dirty), so fishing with bait or very slowly with flies and lures will produce the best results. Rainbow trout were stocked last week. The lake level is low, but launching a small boat is still achievable. Only boats with a 10-horsepower motor or less are allowed on the lake.

At Cataract Lake, the lake level is close to full. Rainbow trout were stocked last week. Anglers fishing with small lures and flies have been catching largemouth bass, rainbow trout and brown trout, and tiger trout recently. Only boats with a 10-horsepower motor or less are allowed on the lake.

Jolan B and his wife camped at Whitehorse Lake campground two weeks ago. He caught one 15-inch bass, one 10-inch bass, and about a dozen smaller ones on crankbaits.

At Upper Lake Mary, the lake level is low, but the concrete on the two main boat launches by the dam are in the water and there are currently no issues launching a boat. Access to the Narrows is now open. Black crappie and bluegill have been recently caught by anglers. The lake is very turbid, so fishing with bait or lures with a lot of vibration is recommended.

Near Willow Beach (Colorado River) in northwestern Arizona, Mike H. reports that large stripers are being caught on swimbaits, jerkbaits and soft plastic jerkbaits. White, orange, green and pink are the top colors. Trout were stocked about two weeks ago and are being caught on PowerBait and Panther Martins (black with the yellow dot, and orange with the gold spoon attached). The smallmouth and largemouth bite further south on Lake Mohave has been good.