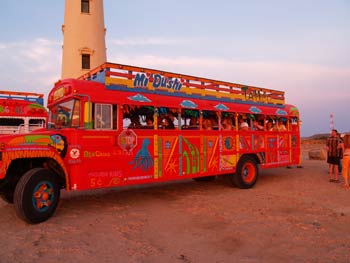 The tour guide greeted each guest with a Rastafarian smile and the gift of a marracha as he gathered us into a gaily-colored bus.

As the bus whisked us away from our hotels to the old lighthouse for a sunset Champaign toast, we, indeed, belonged to Kukoo Kunuku. But this wasn’t some off-beat Caribbean cult, it was a party bus, one of three that would soon cluster on a rise overlooking the northern coast of Aruba and celebrate throughout the evening.

The guide’s admonition was too late.

My wife and I had arrived on Aruba three days before and quickly discovered traction is limited on the small island. We soon lost our footing and slipped into a feeling of calm. It was much like being in a state of grace as the balmy air caressed us from the first moments after landing into an attitude approaching comatose.

On the second day we found the private island.

While Aruba has had some negative press lately, the fact is the people are, arguably the kindest citizens of the Caribbean.

Treatment of tourists on other islands sometimes amounts to churlish servitude but on Aruba the locals will go out of their way to point you to where you can find rum at a cheaper price or will explain how taking the bus will only cost you a $1.25 while a cab will be $10.

The island we found was named Renaissance Island presumably because of the adult beach it nurtured. I must admit I discovered my own version of a Renaissance when I witnessed the first golden beauty rising from her beach chair sans top and wading into the warm water to stand next to me. 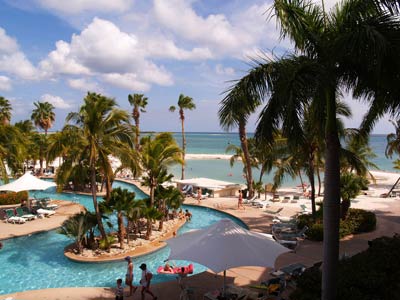 After christening the lighthouse with a unique brand of merriment we climbed aboard our buses and went on a “Mr. Toad’s Wild Ride.” I had never done donuts in a bus in a parking lot before and I especially had never done them backwards.

We arrived somewhat dizzy at the former Minister of Protocol’s house for dinner and the rum tap was opened. Dinner was followed by three (or four) hours of bar hopping, including dancing to the Village People’s obligatory YMCA song (always guaranteed to cut loose the macho tendencies of a young man), before we were all bundled up to be returned to our hotels. I missed my stop and it took a special trip to bring me back.

At the time I felt like I was having the most enjoyable evening of my life. The humming buzz of electric air made the five hours scream by.

It was one of my top-ten memorable evenings (I lead a dull life) but payment became due almost immediately upon the sum popping his head into our hotel window.

Luckily we had made the Mi Dushi snorkeling trip reservations for later in the afternoon and I had time to recover a bit.

For boating enthusiasts, the Mi Dushi tour is a must. With a choice of a five-hour day cruise or a three-hour sunset sail, the experience was exhilarating aboard the 20-meter gaff-rigged ketch. For a 79-foot down winder, motoring is de rigueur against the brisk Aruban breezes but when the sails do catch the breeze all is right with the world.

I was somewhat taken aback by one lovely lady who walked up to me and asked how I liked Renaissance Island. “Did I see you there?” I replied.

“I think you took my photo,” she responded. “Don’t you remember me? I waded into the water right next to you.”

Indeed I didn’t recall such a thing and hurried to say so as I made my quick exit over the side. I didn’t want to miss the sunken freighter just off our bow, now did I?

Aruba was like that. A blur of experiences, some without faces. It appeared to have a playground for everyone. 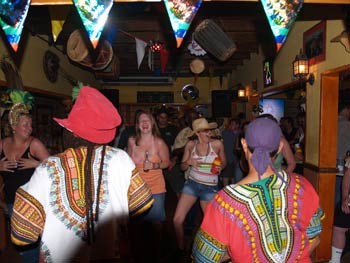 There were helicopter rides, scuba diving (a one-hour lesson and they turn you lose), kiteboarding, ATV’s, horseback riding and excellent food.

In addition to the Kukoo Kunuku tour and Mi Dushi, I recommend El Gaucho for the best Argentine grill north of the Equator and Driftwood for delicious, fresh seafood.

But you probably wouldn’t be able to go wrong even if you found a place close to your hotel.

Each day the bell would ring at 4:30 p.m. at the Renaissance Ocean Suites where we stayed, signaling happy hour by the pool. As guests waded up to the bar, they were greeted with a conveyer-belt delivery of island drinks and, of course, friendly smiles from Natalia, our bartender.

The best thing about Aruba is you really can forget your troubles and stress.

In fact getting brain freeze on tropical drinks while listening to the hot blood of the island beat is my real excuse for not remembering the pretty girl’s face on the private island.

There could be no other believable excuse for me to use.