Many Things To Consider When Going South Of The Border 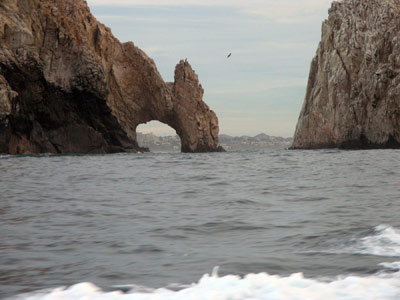 I run Afishinado Charters out of Avalon in Santa Catalina from early spring through September, then I head down to Cabo San Lucas, Mexico,  to fish the big-money billfish tournaments.

Whenever I tell my friends or customers that I am heading to Cabo, Mexico, I get the same reply, “You are a lucky guy!” Usually I feel that way, but dealing with boats in Mexico is not always the pressure-free lifestyle that you might imagine.

Still, many friends with boats dream of the day when they can cast off and head south for a season or two. File this story under the folder “Getting there is half the story.”

Once in Cabo, you will discover a whole new world that you must deal with in order to fish worry-free in the Sea of Cortez. Here is a short list of items:

Cabo currently has one harbor with two “marinas,” which means you have very limited choices as to where you will put your boat. Translation: Be prepared to pay some hefty slip charges.

Marina Cabo San Lucas is the larger operation with the better location farther inside the harbor. Their slips vary greatly, so it does not even serve the reader to mention slip prices.

Just start in the neighborhood of $22.00 per foot and negotiate from there. The only negotiation power that you have is longevity.

Cabo is a seasonal destination due to the very hot summers and mildly active hurricane season in early fall. Insurance companies frequently limit your policy, but more about this later.

The bottom line is that you will get a better slip rate if you negotiate a longer term, so when you think about Cabo, you might want to think about a one-year rather than a three-month visit.

Insurance for a boating Mexico is a continuing saga for U.S. boaters. Most of our local insurance policies that cover boats located in Southern California limit the cruising range to the Rio Santo Thomas, which is just south of Ensenada.

In order to pass that point and have insurance, you will need to secure a policy that will cover you in Cabo. Usually you will need to purchase a Yacht Policy as well as a rider that covers your time in transit.

There are some carriers that offer such policies; however, these seem to change on a regular basis. After changing insurers for three different years, we finally went with a Lloyd’s of London policy.

Luckily we have not had to make any claims, so I cannot speak for the service on such policies; however, the rumor mill presents a scary scenario when you are trying to resolve a claim with this insurer.

Bottom line: If you have an agent you trust and he can get you the insurance, buy it. Additionally, many boaters purchase a separate liability policy from a Mexican insurer.

There are two different levels of permits that you will be required to deal with in Mexico: the entrance permits and the annual permits. Fortunately, there are services in the United States and now in the Cabo Marina that can deal with the entrance permits for you for a small fee of about $45. Well worth it!

They will help you to arrive and be permitted to enter the harbor by submitting your crew list, your documentation, and by helping you to purchase your boat permit. You still might be boarded by customs and immigration people.

At various times, the customs folks have removed the apples from our fridge and the potatoes from our larder. I understand the apples since there was a scare a while back about the pesticides that were being used, but I still do not know what those guys wanted with our potatoes.

If you plan to bring the boat into Cabo permanently, you will be faced with a hefty fee to import your boat (i.e., in excess of $10,000 for a boat under 40 feet). Most boaters simply renew their permits annually, thereby eliminating the import issue.

Your annual permits for the boat and your fishing licenses must be on board. Fishing permits will become the central focus of your life every time you head to Cabo with a new set of fishing buddies.

In the short time that we have been fishing Cabo, the Officina de la Pesca has moved four times. Their hours of operation are a mystery that has still never been revealed to the fishing public, and their location has changed again this year.

We finally found the office in a non-descript building above a retail store. There is a sign on the door that is about 12 x 24 inches identifying this as the current officina; however, in three visits during a one-week span, we still have not found them open.

Your best bet is to get your licenses before you leave the States. If you have a guest who arrives without a license, be sure to go through the hoops and get the license.

I have heard of some guys buying annual licenses and leaving a blank one on board for such cases; however, every time I get a license, the seller wants a name filled in before it is issued.

Well, you made it. You arrived, your paperwork is in order, you got a slip, your permits are all up to date, and it is time to go fishing.

As you head out of the harbor in the early morning light, do not be surprised if you get summoned to pull over to the ferry dock on the way out of the harbor. There are two reasons that this might happen.

One is that there is a heightened terrorist alert, code orange in the United States, so the Mexican Navy has guards on station, checking each boat as they leave. They do not seem to care about your fishing permits, but they do want a dispatch with the crew names.

The other official who will stop you is the Rescuardo de Marina, which seems to be a form of harbor police. This nice gentleman will be in a khaki-colored uniform either in a boat with a big red stripe positioned at the harbor mouth, or he will be on the same pier as the navy.

In either case, he will want the forms as well. In the seven years that I have been coming and going, there is a better than 50 percent chance of getting stopped, so beware. One time I had to pay $50 bucks on the spot since we were fishing a tournament.

Still not sure what that was about; however, it seemed a small price to pay to get on our way.

‘Patience Is A Virtue’

Boats break, and there is but one Travelift and boatyard: the Cabo Yacht Center. I know that the yard gets pressured to ensure that the boats are ready to fish; still, I am an optimist, so I step into the yard office to ask about my chances of getting pulled to install a new transducer and check the running gear.

“I can get you out in the next day or so,” says Mike, the yard manager. Stop in tomorrow and we can set it up.”

So, I stop in the next day. “Come back later” suggests Mike, “My brain is scrambled right now.”

I go for a visit later in the day: “Mike is busy, but he says he will call you to set up a time to pull your boat,” says the yard manager.

Eight hours, no call, so, I stop in again the next morning. “I told you I will call you when we can schedule you in,” says Mike.

Still no call during the day so I pull my boat up to the lift where Mike and gang are busily preparing the yard owner’s boat for a big tournament. “We are closed,” says Mike; “Stop in the office in the morning.”

After waiting another beautiful day in paradise, I head for the marina office. No Mike. The office manager suggests I come back later.

After coffee, I return, and as I open the door with a nice greeting, “I’m baaack,” Mike looks at me and says, “There is no way we can pull your boat.”

Ahhh, Mexico! You have to be ready for Plan B — in this case, fishing without a depthsounder and with a slight vibration on the port side. That is why God created tequila!

When you decide to make the run south, be sure to remember that, in spite of the Costco and the Home Depot, there is still no West Marine. There is one good mechanic in town, and there is one good electrician, and one very busy boatyard.