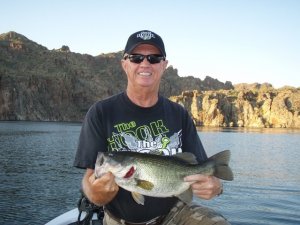 Arizona Lakes, Arizona Pros – Larry Mantle has been a fixture on Arizona’s lakes for years, and he’s one of the most respected anglers out there. In the 1980s and ‘90s he teamed up with John Murray and the two of them were pretty much top dogs on the tournament circuits for all that time.

Larry is one of the most energetic guys I know, and he’s also one of the most friendly guys you’ll ever meet. He currently guides for the Hook Up Outfitters, and if you get a chance, you’ll never regret a day on the water learning from Mantle.

We Learn From Him

John and I have had the pleasure of going out fishing with Larry several times, and we never fail to learn something new. Nothing about fishing is left to chance with Larry. For instance, driving to Alamo Lake involves some serious dust, so he takes his reels apart and uses WD40 to clean them. Just the tiniest amount of oil is necessary to lube them – too much oil just collects dust and turns to sticky sludge.

Those dusty roads are really hard on reels, even if they are in the rod locker, so Larry will dip the reels in the lake to rinse them off. “Fix it before it breaks” is his motto.

Crawdads says Arizona Lakes, Arizona Pros – Larry Mantle live at different levels and come in different colors. He loves to crash jigs – since crawdads are hard, a jig doesn’t bother a bass at all. He uses big ones – often one ounce, because “you gotta touch bottom”. Crashing a jig simply means getting your jig on the bottom, then hopping or dragging it so it crashes into rocks and other structure.

The combination of the mud stirred up and the noise attract bass, and they just hammer those big jigs. A Yamamoto Hula Grub is ideal for jigs – the combination of the skirt and the two tails give the bulk and outline of a craw, and they come in tons of colors. Pick one to match the craws or pick a color that will show up best in the water.

Arizona Lakes, Arizona Pros – Larry Mantle suggests finesse baits in low water, but with the water up like it is now, you can use spinnerbaits, buzzbaits, and crankbaits. He uses scent on plastics every five to ten minutes – it’s a confidence factor for him. The fish seem to hang on better when he uses scent.

Mantle loves Michaels topwater baits – they are little poppers that were incredibly expensive when they first came out – I’m talking $25 each several decades ago! I still have a couple, but I don’t know where to buy any now. I do know that the Lobina Lures Rico is the spitting image (pardon the pun) of the Michael. You can find them at www.lobinalures.com. Seriously, they work every bit as well as the Michael.

In Arizona, the best topwater bite is in the middle of the day, not the early morning, he says. A lot of people make the mistake of starting out with topwater first thing then laying it down when the sun gets up. That’s a mistake. He often starts out deep then moves shallow around 11 a.m.

Tournaments Should Be Fun

When he’s prefishing for a tournament, Larry removes the hooks from his lures. He want to know what they’re biting, not sore-mouth them. Removing the hooks also keeps the stripers from stealing the lure if you’re on Pleasant. Also, during a tournament, he never fishes the same bait as his partner.

Fishing with John Murray was one of the biggest helps to him, he says. He loves fishing because it isn’t about how big you are or what sex you are – it’s about how you can find fish. Anyone can catch fish, he says. The best thing you can do is get into a club and get contacts. People get nervous about fishing tournaments and they shouldn’t – it should be fun. Do it to meet other fishermen and have a good time and learn. Larry always tries to put his non-boaters at ease.

Once you get on a pattern, try to understand why the fish are there. If you know the lake, you can find more spots like that. Experience on the water is the only way to learn a lake. He says get to where you have five spots that will get you one fish each. Then try to upgrade.

On a strange lake, get up there early and just drive around it. Consider the conditions and try to figure out where the fish will be. Eliminate unlikely water. He and John have spent as much as 2 hours on a spot they had confidence in before the fish started biting. The biggest problem is convincing your partner you know what you’re doing!

If you’re at the point of “what to do?” at Alamo Lake, try to find shallow fish. There are always shallow fish and there are always deep fish, he says. Shallow fish are more affected by changes in weather, so if something drastic happens, find the deep fish. His advice is to grab a Westy worm and put it on 6# line, then just drop it down to them.

The original Westy Worms were made with super floater worms and two straight and rather soft hooks. They are hard to find. Nowadays you can find knock-offs like the Robowesty Roboworm Rig, but they aren’t made with superfloaters and they have different hooks. The front hook should be on a small jighead and the back hook is tied to the front one with a short length of mono.