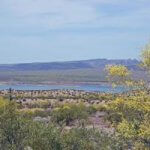 A federal court denied the State of Arizona’s motion for a temporary restraining order to prevent the U.S. Army Corps of Engineers from conducting a high-flow water release at Alamo Lake beginning this week.

The Arizona Game and Fish Commission on Feb. 26 had voted unanimously to request that the Office of the Arizona Attorney General pursue the action.

The Game and Fish Department and Arizona State Parks have expressed concerns over the timing of the project. Game and Fish estimates the rapid draw-down of the lake at this time of year will disrupt reproduction and recruitment in fish such as largemouth bass and black crappie, as they are currently in pre-spawn condition in Alamo Lake and expect to be spawning during the proposed drawdown.

In addition, as the lake is drawn down, the shallow areas will dry, and most, if not all, of the current spawning area and eggs would likely be lost.

Game and Fish says the loss of that segment of the fish population at Alamo not only would have biological impacts to the fishery, but also it would include negative impacts to the state and local economy. Alamo Lake State Park draws visitors from around the state for its premier bass and crappie fishing. Many anglers are reporting some of the best fishing at Alamo Lake in recent years and hope for another successful spring spawn that would be dependent on steady water levels keeping shoreline spawning beds submerged.

Most of the visitation to Alamo Lake and Alamo Lake State Park occurs this time of year, and most of the visitors are anglers and boaters. The Department has additional concerns such as safety issues related to launching boats on ramps where cement slabs would be exposed.

The State’s complaint and motion for TRO filed March 2 contended the Corps violated the National Environmental Policy Act (NEPA) process in its proposed action by failing to adequately evaluate the impacts a high-flow release at this time would have on aquatic wildlife and recreation in Alamo Lake.

The Corps wants to drop the lake level by about 10 feet to facilitate inspection and maintenance of Alamo Dam’s intake sill. It proposes to do this by releasing water at a flow of up to 5,000 cfs, with a total release time not to exceed 20 days and the peak of the release to occur prior to March 15. The project will cause flows below Alamo Dam in excess of the typical non-flood flows of 20-50 cfs.

“We didn’t think this legal action was an egregious demand,” said Jim Ammons, chairman of the Arizona Game and Fish Commission. “We don’t object to the project, just to the timing of it. The Corps has failed to explain why the timing in March is the only option for it to achieve its objectives.

We still believe it has other feasible options to do this project later in the year when it would have less of an impact on the fishery and the local economy.”