The Lake Havasu Marine Association has been notified that it has received the prestigious Arizona Game and Fish Department Award for Excellence. 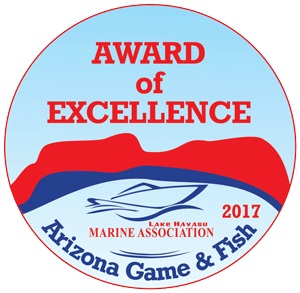 An Asset To Havasu Community

“They’ve been a great partner for us, and an asset to the Havasu community,” Barber said. “They’ve never failed to step up when asked, and sometimes we don’t even have to ask. They work hard and take their contributions seriously…they’re a real asset.”

According to Barber, the Award for Excellence has been given to communities throughout Arizona for several decades, but this marks the first year in which a Havasu based organization has been a recipient.

Since 2005 the Marine Association has taken initiative in aiding environmental agencies against invasive species, conserving native species and enhancing recreational opportunities on Lake Havasu. The group has been instrumental in the construction of launch ramps, launched a cooperative boating registration program with Game and Fish and began an underwater fish habitat program. The association also aided in boater education, in concert with AZGF’s “Clean, Drain and Dry” program.

“Jim could have easily spent the past decade focused on how to get more boats sold and on the waters of Lake Havasu, but instead he recognized the benefits of a broader vision,” commented Barber in his nomination of the Marine Association and Salscheider for the award.

“But instead he recognized the benefits of a broader vision, developed partnerships with government agencies, local businesses and members of the public, and rallied Marine Association volunteers to spread the message that the freedom to boat comes with a commitment to boater education and personal responsibly.”

Salscheider remarked that credit for the Marine Association’s accomplishments extended far beyond himself.

“Almost 10 years ago, when I took over the Marine Association, we agreed that whatever happened, we would have a seat at the table with agencies that make rules and regulations for boating on the lake,;I believe this tells us we’ve succeeded in doing that.”

A formal awards ceremony will be held in Phoenix on January 13 to present the awards.