There won’t be a shortage of new 2019 models for visitors to the 28th Annual Lake Havasu Boat Show to peruse come April 5-7 at Lake Havasu State Park, Windsor 4 event venue. Maybe the most impressive will be the assortment of brand new high performance sportboats from several of the most prominent west coast boat builders.

What’s most striking is the fact that high performance outboard powered has made a serious comeback in this specialty segment of the market which was once dominated by super powerful V-8 automotive inboard stern drive packages. Today, more than fifty percent of the new custom builds are finding customers preferring the new-age outboards, especially from the Mercury Racing division. 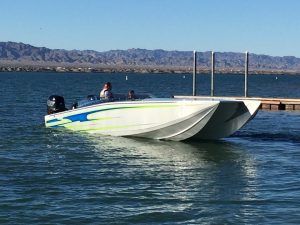 Heading the list of new models getting ready to hit the water in 2019 is the Nordic 35-foot flat deck. An all new “true” catamaran designed with twin outboard power options that does not incorporate the familiar center pod which is so common among hulls of this general type. The new 35 flat deck will be outfitted with a pair of Mercury Racing 400R V-8 outboards and features an all-composite construction. The hull and deck are completely void of any wood.

Eliminator Boats of Mira Loma, Calif., which has recently changed ownership, is also embarking on an aggressive campaign of introducing new models in the go-fast category. At the top of the list is a new 30-foot Speedster which is more than a foot wider than the previous 30 Daytona model. The 30 Speedster is also destined to see lots of outboard power options with a fresh new interior design.

Although still a few months away from water testing, the 30 Speedster is anticipated to reach top speeds in the 120 mile an hour range with twin Mercury Racing 400R outboards. 2019 is also Eliminator’s 50th anniversary in business, and special 50th anniversary gelcoat graphics and amenity packages are available on a number of models including the 30 Speedster.

Cobra Performance Boats has a new head-turning 280 Venom cat added to its 2019 model line-up. This model is new from top to bottom with dazzling new styling inspired by some of the most exotic high performance sportcars. The 280 Venom is also versatile when it comes to power selection, able to handle large multi-engine outboard options as well as single stern drives.

A new name in the performance boat market is Barron Boats from Azusa, Calif. Jerry Barron, son of Hallett Boats five -decade owner, Nick Barron, has struck-off on his own to develop a new model line. Barron’s first offering is the 290 Sport, a racy-looking and very roomy performance deck boat that is sure to appeal to boaters looking for both comfort and functionality as well performance and quality. 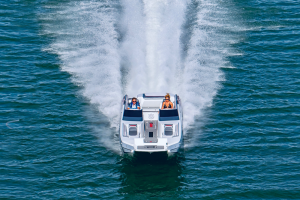 These are only a few of the over 250 boats scheduled to display at the 2019 Lake Havasu Boat Show which will include family runabouts, fishing boats, pontoons, a generous assortment of wakesport boats, jet boats, personal watercraft, kayaks paddleboards and hundreds of marine accessories.

A fun new addition to the Havasu Boat Show this year is an on-land poker run that’s free to enter to all admission ticket purchasers. The Boat Show poker run is being presented by Adspay. Attendees to the show only need to sign-up when they enter and begin collecting cards at various designated exhibitor booths located throughout the show. If you’re lucky enough to collect a winning poker hand, there’s a boat-load of great prizes.

The 28th Annual Lake Havasu Boat Show, presented in conjunction with the Lake Havasu Marine Association, opens to the public on Friday, April 5 at noon. Saturday and Sunday, gates open at 9am. Admission is $8.00 for adults and kids six and under are free, and parking is also free.