Robbins Butte Wildlife Area Annual Youth Mentored Dove Hunt. 4:30 a.m. Sept. 3. This event is free to all youth (ages 10 to 17) who can safely handle a shotgun, accompanied by an adult and a certified mentor on site to provide the best experience. This event is sponsored by Youth Outdoors Unlimited. Register: www.youthoutdoorsunlimited.com.

Labor Day is a federal holiday in the United States celebrated on the first Monday in September to honor and recognize the American labor movement and the works and contributions of laborers to the development and achievements of the United States. The three-day weekend it falls on is called Labor Day Weekend.

Beginning in the late 19th century, as the trade union and labor movements grew, trade unionists proposed that a day be set aside to

celebrate labor. “Labor Day” was promoted by the Central Labor Union and the Knights of Labor, which organized the first parade in New York City. In 1887, Oregon was the first state of the United States to make it an official public holiday. By the time it became an official federal holiday in 1894, thirty states in the U.S. officially celebrated Labor Day.

In 1973, the first Grandparents Day in West Virginia was proclaimed by Governor Arch Moore. Their work culminated in 1978 when the United States Congress passed legislation proclaiming the first Sunday after Labor Day as National Grandparents Day.

In the United States, Patriot Day occurs on September 11 of each year in memory of the people killed in the September 11 attacks of the year 2001.

September 18, 1947: Until the Space Force, the Air Force was known as the most recent branch of the U.S. military to be formed, the Air Force is also the largest and most technologically advanced air force in the world. Initially part of the United States Army, the USAF was formed as a separate branch of the military on 18 September 1947 under the National Security Act of 1947.

The Peregrine Fund and Bureau of Land Management at Vermilion Cliffs National Monument are hosting a celebration on National Public Lands Day, Saturday, September 24 by releasing captive-bred California Condors at 1 p.m. MDT (noon MST, northern-Arizona Condor Time) to take their first flights in the wild. The event will be held in-person at Vermilion Cliffs National Monument for anyone interested in traveling to the area, and it will be live streamed via The Peregrine Fund’s YouTube Channel.

Buy One, Get One Camping Promotion Returns to Maricopa County Parks: To book a camping reservation and receive a free night, contact the parks at (602) 506-2930 or book your reservation online at maricopacountyparks.org. The promotion is valid for stays booked between October 1 and November 10, 2022. 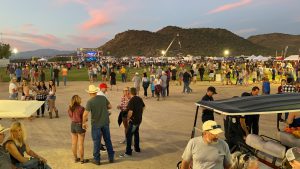