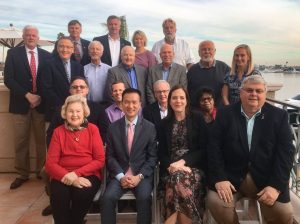 A panel of distinguished boating leaders who serve as a sounding board for Boat Owners Association of The United States (BoatUS) gathered recently — along with esteemed guests and BoatUS staff —  in Newport Beach to discuss key issues impacting recreational boating, including the changing boat-ownership model and shifting boater demographics. BoatUS is the nation’s largest recreational boat owners group in the U.S. with more than a half-million dues-paying members.

The group also discussed legislative issues that help keep the association’s focus on the evolving needs of recreational boaters, including some who now get on the water without having to own a boat via boat-sharing clubs. The National Marine Manufacturers Association, U.S. Power Squadrons, National Association of State Boating Law Administrators, and U.S. Coast Guard Auxiliary all provided updates on activities.

Celebrating more than 50 years, BoatUS is the nation’s largest organization of recreational boaters with more than a half-million members. We are the boat owners’ voice on Capitol Hill and fight for their rights. We are The Boat Owners Auto Club and help ensure a roadside trailer breakdown doesn’t end a boating or fishing trip before it begins.

When boats break down on the water, TowBoatUS brings them safely back to the launch ramp or dock, 24/7.