Something Different This Month: Crappie Pros Rambo and Chamberlin Tell Us What Not to Do!

Most anglers are familiar with bass pros, but Arizona anglers might not be aware that there are a lot of crappie pros out there, too. Crappie tournaments are starting to mean big money and slab hunters have learned a few tricks to help them target the big fish. Closer to home, guys like Curt Rambo and Art Chamberlin are known for their crappie prowess. What do these guys think the biggest crappie fishing mistakes are?

Don’t Stay In One Place

Todd Huckabee, a well-known Oklahoma crappie pro, fishes and wins tournaments all over the country. “Without a doubt, the biggest mistake crappie fishermen make is to stay in one place for too long,” Todd said without hesitation.“There’s a saying that the guy who hits the most trees wins,” Todd explains, “and I don’t stay in a spot more than two minutes most of the time.” The active fish will bite right away, he asserts, so there’s no point hanging around once you’ve caught those aggressive few.

“You’ll hear guys say ‘they were really biting when I got here’, and they’ll sit there wasting the day waiting for them to start biting again. That’s just crazy!” Huckabee says. “I’ll hit 50 trees and catch 200 fish while they’re sitting on that spot waiting for some aggressive fish to show up.” 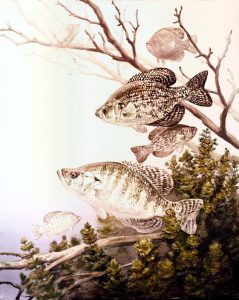 Another big mistake crappie anglers make is downsizing instead of going bigger, Huckabee says. “More often than not, a bigger lure will get more bites,” he says. “It’s just nature. You’re causing more aggression. If they aren’t biting a little lure, and you go to a bigger one, they’ll have to hit it harder to get it in their mouth.”

Inactive fish, says Todd, will go up to a little jig and suck it in and spit it out. But with a bigger one they can’t spit it out as easily, giving you a better chance at a hookset. So when the fish are really finicky, he switches to a bigger bait rather than a smaller one.

Don’t Use Too Light A Line

Todd says that crappie fishermen also tend to use line that is too light and has too much stretch. When you’re fishing deep or your lure is far from the boat, all that stretch makes it difficult, if not impossible, to get a good hookset.

Even at ten feet deep, he says, 6-pound-test line stretches a LOT before you feel it. Huckabee swears by 10-pound-test Silver Thread AN40. He says it has the knot strength of mono and the sensitivity of fluorocarbon, and it doesn’t cut into itself or burn. Arizona experts Curt Rambo and Art Chamberlin have both switched to braided line.

Don’t Move On Too Quickly

While Todd Huckabee says that sitting still is a cardinal sin, crappie guru Curt Rambo of Arizona says that the biggest mistake crappie anglers make is moving on too quickly.

They’re both right. Todd fishes lakes that boast plenty of submerged trees and brush, while Rambo plies his craft on Roosevelt Lake. Todd is after big slabs, because in his trade, pounds equal dollars. Curt, on the other hand, just wants to have a good time and put some dinner in the livewell, since he has all but given up guiding.

On Roosevelt, Curt fishes an occasional submerged bush, and a few brushpiles installed by dedicated crappie anglers. His technique is to sit directly over the fish and vertical jig for them, using a 2-inch root beer/chartreuse Power Grub. Curt drops the lure to the bottom, then tightens the line and gives the reel four or five cranks. He raises and lowers the rod slowly, watching the line for signs of a bite.

If he doesn’t get bit right away, Curt will raise the lure a little and keep on trying. He’ll stay half an hour in a spot he knows holds fish, even if he’s not getting bit. He knows he just needs to figure them out.“You should stay right there and try to figure out why the fish are there,” Curt says. He says trollers should go back over spots where they hooked up, too. Also, if you’re fishing down the bank and get a bite or two, he says you should stay there at least half an hour and try to catch more.

Besides moving too quickly, Rambo says that using the wrong jig and line can be a big mistake. “The weight of the bait and the line controls the depth and speed of the lure,” he explains, “especially if you’re trolling. The difference between a 1/32-, a 1/16-, and a 1/8-ounce jig may be only two or three feet, but it makes a big difference.”

Those two or three feet can be crucial to a vertical jig presentation, he adds. When you’re jigging for crappie and not getting bit, it’s not the bait, it’s the depth. “You need to be right there.”

Art Chamberlin fishes for crappie on the same lake that Curt Rambo fishes, but Art is a troller. Art says that beginning trollers often don’t realize how crucial the proper depth and speed are. “You need to use a GPS or mark the lines or something to determine your speed,” Art emphasizes. To control depth he recommends calculations by length of line you have out (use a line counter), or the use of downriggers.

If you’re not getting bit, Art recommends that you first change your speed. It’s the easiest change to make, he says. Once he wanted to fish an area that was about 150 yards away, so he cranked up to the “ridiculous” speed of 2 miles per hour and all of his crankbait rods got hit immediately.

Half Crankbaits, Half Jigs

Since Art always keeps his lures at 12 to 16 feet, no matter what time of year or how deep the water, all he has to do is shorten the lines if he speeds up. Art runs half crankbaits and half jigs on his rods.