There Is No Excuse Not To Fish 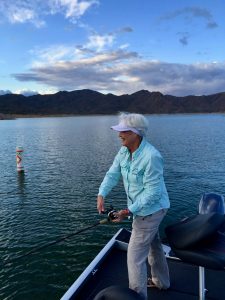 I never fished much as a kid — my dad would take us to the canal once in a while and we’d fish with hotdogs or baloney, but I don’t remember catching anything. Dad mostly took us camping, hiking, and hunting. His theory was to stay away from water, because that was where the crowds were.

It Began At The Verde

Once when we were hunting, we stopped by the Verde River to have a bite of lunch. We always kept these little 4-piece travel rods in the camping gear, so I got one out. I didn’t have any bait, so I put a leaf on the hook, through the stem – and I caught a trout on it! Dad went around telling everyone I was such a good fisherman that I could catch them on plants.

Then I Met John

Then I met John. When my birthday came up, he asked me if I’d rather have diamond earrings or a fishing trip. Of course I chose the fishing trip, and we went up to the Rim and fished in streams and little lakes for trout. I had a blast! John is a total outdoorsman, so we’re a perfect match, and we’ve been fishing and hunting together ever since.

When we got married, we bought a little boat and joined a club for married couples: Central Arizona Spouse Teams. We had such great times in that club – the entry fees for our bass tournaments were only about $40, and most of our events were two days, so we got to camp with the other couples and talk fishing.

I became obsessed with bass fishing and started asking questions and reading everything I could. John and I fished every weekend, and we also fished the Wednesday night tournaments at Pleasant. We got pretty good at night fishing, so one day while John was at work, I sat down at my typewriter (yup, no computers back then!) and wrote a story titled “Night Fishing on Lake Pleasant”.

I sent that story to Tom Stiles at Arizona Hunter and Angler, and he bought it. I was so excited that when I called John at work to tell him, he thought I had crashed the car or something. Pretty soon I was writing for all kinds of magazines, and then Tom asked me to be the fishing editor of Arizona Hunter and Angler and for years I got to go out fishing with the best fishermen in Arizona and ask them questions and write about them. I hope my readers learned as much as John and I did from all those great guys.

Fishing is so much fun and such a great way to relax – I love it. It’s one of the few sports where women can compete head to head with men – it doesn’t require a lot of strength, just knowledge and technique. Anyone can learn to fish, and I’ve known a lot of really good female bass anglers. John and I used to go back east and referee the Lady Bass Classic every year, and I’m telling you, those ladies were every bit as good at fishing as the men are.

I particularly like fishing as a couple or a family. When I do stories, John and I always go out together. We’re a good team: he fishes with the guy and plies him with questions, while I take notes and pictures and ask a few questions myself. It’s always fun, and fishermen are seriously the nicest guys out there.

In the 30+ years that I’ve been fishing and writing, I’ve met some really big names in tournament bass fishing, and without fail they have all been great – never once did I feel that they thought I was a second-class citizen because I wasn’t a man.

The most fun was back when Operation Bass held the All American. There would be 50 anglers who had competed all year to win a spot, and Operation Bass would invite Press Anglers to come out and ride with them. They’d pay our way, put us up in a nice hotel, and we’d get to go out with a different guy every day. It was a blast.

On practice days, the press angler who caught the biggest fish would win a reel. John has won it twice! We got to see fantastic lakes and rivers, meet awesome people, and just generally have the time of our lives. I miss those days!

Of course, we have introduced our granddaughters to fishing. By the time she was ten years old, Trinity could run the trolling motor, fish, and read the depthfinder simultaneously. She and Emily love to fish for both bass and crappie. Even our dogs love to go fishing with us!

One of the best things about fishing is that when you are out on the water, you are away from distractions and can really talk to each other. The only time any of us ever takes out a phone is to snap a photo.

My Advice To Women

My advice to any lady who would like to learn to fish is to just do it. Buy a rod and reel. You don’t have to have a boat – you can catch a lot of fish from shore. Read as many things as you can about fishing. There are plenty of good websites just packed with information about any kind of fishing you can think of.

If you’d like to really learn a lot about bass fishing, join a bass club that has draw tournaments. This means that as a non-boater, your entry fee is lower than the guy (or gal!) with the boat. The night before the tournament, names will be drawn to determine who fishes with whom. I guarantee you will learn from every tournament.

Generally, the weights are separate, so if you don’t catch a bunch a big fish, it’s not going to affect the boater at all. Just make sure you give him some gas money – running a bass boat isn’t cheap. There are even clubs for kids in junior high and high school, and anyone can join – boys or girls. Adult volunteers captain the boats, so there is nothing to worry about.

More and more women are getting into fishing these days, and I think it’s great. Opportunities to fish are everywhere – even in town you can fish community lakes. If your husband or boyfriend already fishes, ask him to take you with him. Be teachable, and also learn all you can on your own. I know a lot of husband and wife team bass anglers who do really well.

If you’re worried about killing and cleaning fish, then don’t kill them – catch and release is what most bass anglers practice anyway. Seriously, there is no excuse for a woman not to fish. Just get out there and do it.

Some Related Sites For More Information