San Diego Bay Parade Of Lights Announces 2019 Theme: ‘Comic-Con On The Bay’
One of San Diego’s most popular holiday events scheduled for December 8 and 15 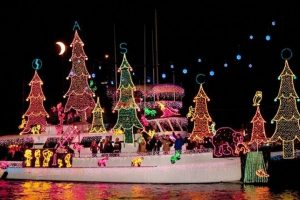 The San Diego Bay Parade of Lights today announced the theme for the 2019 holiday boat parade is “Comic-Con on the Bay,” a timely collaboration between the two premier San Diego events as Comic-Con celebrates its 50th anniversary this year.

Over the years, Comic-Con has become the focal point for the world of comics conventions. With attendance topping 130,000 annually, the event has grown to include satellite locations, including local hotels and outdoor parks.

“The San Diego Bay Parade of Lights gives boat enthusiasts and owners an opportunity to demonstrate their creativity in a fun way and we can’t wait to see what they come up with to celebrate Comic-Con’s 50th Anniversary this year,” said Parade Chairman Larry Baumann. “I’m sure the thousands of spectators who visit the bay to view the dazzling lighted boats will get a kick out of this year’s theme.”

The dates for this year’s parade are December 8 and 15. This year marks the 48th anniversary for the Parade of Lights.

Presented by the Port of San Diego, the San Diego Bay Parade of Lights brings more than 100,000 San Diego residents and visitors to the San Diego Bay waterfront each year. The procession of more than 80 lavishly decorated boats has become one of the region’s most iconic holiday events.

The parade route starts at Shelter Island and travels west past Harbor Island, then south along the Embarcadero, Seaport Village, and Cesar Chavez Park before turning parallel with the Coronado Bridge to the west side of the bay. The parade then proceeds past Peohe’s Chart House to the finish line in front of the Ferry Landing. It takes about two hours to complete the procession and there are many comfortable waterfront viewpoints along the route.

A variety of prizes and awards are presented to the best decorated boats and those that best capture the parade’s theme. All participants will receive a participant plaque and are invited to the awards dinner held at Tom Ham’s Lighthouse.

San Diego Bay Parade of Lights is sponsored by the Port of San Diego’s Tidelands Activation Program, designed to bring our dynamic waterfront alive with events that engage the community and inspire visitors to enjoy San Diego Bay.

About The Port Of San Diego’s Tidelands Activation Program