Our  New Year Begins With These American Traditions

King was the chief spokesperson for nonviolent activism in the Civil Rights Movement, which successfully protested racial discrimination in federal and state law. The campaign for a federal holiday in King’s honor began soon after his assassination in 1968. President Ronald Reagan signed the holiday into law in 1983, and it was first observed three years later. At first, some states resisted observing the holiday as such, giving it alternative names or combining it with other holidays. It was officially observed in all 50 states for the first time in 2000.

The idea of Martin Luther King Jr. Day as a holiday was promoted by labor unions in contract negotiations. After King’s death, U.S. Representative John Conyers (a Democrat from Michigan) and U.S. Senator Edward Brooke (a Republican from Massachusetts) introduced a bill in Congress to make King’s birthday a national holiday. The bill first came to a vote in the U.S. House of Representatives in 1979. However, it fell five votes short of the number needed for passage.

Two of the main arguments mentioned by opponents were that a paid holiday for federal employees would be too expensive and that a holiday to honor a private citizen would be contrary to longstanding tradition (King had never held public office) Only two other figures had national holidays in the U.S. honoring them: George Washington and Christopher Columbus.

Soon after, the King Center turned to support from the corporate community and the general public. The success of this strategy was cemented when musician Stevie Wonder released the single “Happy Birthday” to popularize the campaign in 1980 and hosted the Rally for Peace Press Conference in 1981. Six million signatures were collected for a petition to Congress to pass the law, termed by a 2006 article in The Nation as “the largest petition in favor of an issue in U.S. history”.

Senators Jesse Helms and John Porter East (both North Carolina Republicans) led the opposition to the holiday and questioned whether King was important enough to receive such an honor. Helms criticized King’s opposition to the Vietnam War and accused him of espousing “action-oriented Marxism”. Helms led a filibuster against the bill and on October 3, 1983, submitted a 300-page document to the Senate alleging that King had associations with communists. Democratic New York Senator Daniel Patrick Moynihan declared the document a “packet of filth”, threw it on the Senate floor and stomped on it.

President Ronald Reagan originally opposed the holiday, citing cost concerns. When asked to comment on Helms’ accusations that King was a communist, the president said “We’ll know in thirty-five years, won’t we?”, referring to the eventual release of FBI surveillance tapes that had previously been sealed. But on November 2, 1983, Reagan signed a bill into law, proposed by Representative Katie Hall of Indiana, to create a federal holiday honoring King.

The bill also established the Martin Luther King Jr. Federal Holiday Commission to oversee observance of the holiday, and Coretta Scott King, King’s wife, was made a member of this commission for life by President George H. W. Bush in May 1989.

Although the federal holiday honoring King was signed into law in 1983 and took effect three years later, not every U.S. state chose to observe the January holiday at the state level until 1991, when the New Hampshire legislature created “Civil Rights Day” and abolished its April “Fast Day”. In 1999, New Hampshire became the last state to name a holiday after King, which they first celebrated in January 2000 – the first nation-wide celebration of the day with this name.

In 1986, Arizona Governor Bruce Babbitt, a Democrat, created a paid state MLK holiday in Arizona by executive order just before he left office, but in 1987, his Republican successor Evan Mecham, citing an attorney general’s opinion that Babbitt’s order was illegal, reversed Babbitt’s decision days after taking office. Later that year, Mecham proclaimed the third Sunday in January to be “Martin Luther King Jr./Civil Rights Day” in Arizona, albeit as an unpaid holiday.

In 1990, Arizona voters were given the opportunity to vote on giving state employees a paid MLK holiday. That same year, the National Football League threatened to move Super Bowl XXVII, which was planned for Arizona in 1993, if the MLK holiday was voted down.  In the November election, the voters were offered two King Day options: Proposition 301, which replaced Columbus Day on the list of paid state holidays, and Proposition 302, which merged Lincoln’s and Washington’s birthdays into one paid holiday to make room for MLK Day. Both measures failed to pass, with only 49 percent of voters approving Prop 302, the more popular of the two options; although some who voted “no” on 302 voted “yes” on Prop 301.Consequently, the state lost the chance to host Super Bowl XXVII, which was subsequently held at the Rose Bowl in Pasadena, California.  In a 1992 referendum, the voters, this time given only one option for a paid King Day, approved state-level recognition of the holiday.

On May 2, 2000, South Carolina governor Jim Hodges signed a bill to make King’s birthday an official state holiday. South Carolina was the last state to recognize the day as a paid holiday for all state employees. Before the bill, employees could choose between celebrating Martin Luther King Jr. Day or one of three Confederate holidays.

The national Martin Luther King Day of Servicewas started by former Pennsylvania U.S. Senator Harris Wofford and Atlanta Congressman John Lewis, who co-authored the King Holiday and Service Act. The federal legislation challenges Americans to transform the King Holiday into a day of citizen action volunteer service in honor of King. The federal legislation was signed into law by President Bill Clinton on August 23, 1994. Since 1996, Wofford’s former state office director, Todd Bernstein, has been directing the annual Greater Philadelphia King Day of Service, the largest event in the nation honoring King.

Since 1994, the day of service has been coordinated nationally by the Corporation for National and Community Service, a federal agency, which provides grants to organizations that coordinate service activities on MLK Day.

Groundhog Day  is a popular North American tradition observed in the United States and Canada on February 2. It derives from the Pennsylvania Dutch superstition that if a groundhog emerging from its burrow on this day sees its shadow due to clear weather, it will retreat to its den and winter will persist for six more weeks; but if it does not see its shadow because of cloudiness, spring will arrive early.

While the tradition remains popular in modern times, studies have found no consistent correlation between a groundhog seeing its shadow and the subsequent arrival time of spring-like weather.The weather lore was brought from German-speaking areas where the badger (German: Dachs) is the forecasting animal. This appears to be an enhanced version of the lore that clear weather on the Christian festival of Candlemas forebodes a prolonged winter.

The Groundhog Day ceremony held at Punxsutawney in western Pennsylvania, centering around a semi-mythical groundhog named Punxsutawney Phil, has become the most attended ceremony. Other cities in the United States and Canada have also adopted the event.

The Pennsylvania Dutch were immigrants from Germanic-speaking areas of Europe. The Germans already had a tradition of marking Candlemas (February 2) as “Badger Day” (Dachstag), where if a badger emerging found it to be a sunny day thereby casting a shadow, it foreboded the prolonging of winter by four more weeks.

The observance of Groundhog Day in the United States first occurred in German communities in Pennsylvania, according to known records. The earliest mention of Groundhog Day is an entry on February 2, 1840, in the diary of James L. Morris of Morgantown, in Pennsylvania Dutch Country, according to the book on the subject by Don Yoder. This was a Welsh enclave but the diarist was commenting on his neighbors who were of German stock. 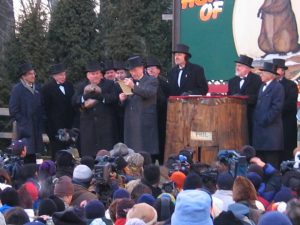 The first reported news of a Groundhog Day observance was arguably made by the Punxsutawney Spirit newspaper of Punxsutawney, Pennsylvania, in 1886: “up to the time of going to press, the beast has not seen its shadow”. However, it was not until the following year in 1887 that the first Groundhog Day considered “official” was commemorated there, with a group making a trip to the Gobbler’s Knob part of town to consult the groundhog. People have gathered annually at the spot for the event ever since.

Clymer Freas (1867–1942) who was city editor at the Punxsutawney Spirit is credited as the “father” who conceived the idea of “Groundhog Day”. It has also been suggested that Punxsutawney was where all the Groundhog Day events originated, from where it spread to other parts of the United States and Canada.

The Groundhog Day celebrations of the 1880s were carried out by the Punxsutawney Elks Lodge. The lodge members were the “genesis” of the Groundhog Club formed later, which continued the Groundhog Day tradition. But the lodge started out being interested in the groundhog as a game animal for food. It had started to serve groundhog at the lodge, and had been organizing a hunting party on a day each year in late summer.

A Hunt And A Feast

The chronologies given are somewhat inconsistent in the literature. The first “Groundhog Picnic” was held in 1887 according to a book for popular reading by an academic, but given as post-circa-1889 by a local historian in a journal. The historian states that around 1889 the meat was served in the lodge’s banquet, and the organized hunt started after that.

Either way, the Punxsutawney Groundhog Club was formed in 1899, and continued the hunt and “Groundhog Feast”, which took place annually in September. The “hunt” portion of it became increasingly a ritualized formality, because the practical procurement of meat had to occur well ahead of time for marinating. A drink called the “groundhog punch” was also served. The flavor has been described as a “cross between pork and chicken”.The hunt and feast did not attract enough outside interest, and the practice discontinued.

The groundhog was not named Phil until 1961, possibly as an indirect reference to Prince Philip, Duke of Edinburgh.

The largest Groundhog Day celebration is held in Punxsutawney, Pennsylvania, where crowds as large as 40,000 gather each year (nearly eight times the year-round population of the town). The average draw had been about 2,000 until the 1993 movie Groundhog Day, which is set at the festivities in Punxsutawney, after which attendance rose to about 10,000. The official Phil is pretended to be a supercentenarian, having been the same forecasting beast since 1887.

In 2019, the 133rd year of the tradition, the groundhog was summoned to come out at 7:25 am on February 2, but did not see its shadow. Fans of Punxsutawney Phil awaited his arrival starting at 6:00 a.m., thanks to a live stream provided by Visit Pennsylvania. The live stream has been a tradition for the past several years, allowing more people than ever to watch the animal meteorologist.

Note: Some information supplemented by Wikipedia.