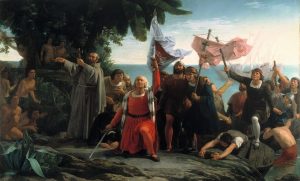 Columbus Day is a national holiday in many countries of the Americas and elsewhere which officially celebrates the anniversary of Christopher Columbus’s arrival in the Americas on October 12, 1492. Christopher Columbus was an Italian explorer and colonizer on behalf of Spain, who set sail across the Atlantic Ocean in search of a faster route to the Far East only to land at the New World. His first voyage to the New World on the Spanish ships Santa María, Niña, and La Pinta took approximately three months.

Columbus and his crew’s arrival to the New World initiated the Columbian Exchange which introduced the transfer of plants, animals, culture, human populations, and technology (but also invasive species, including communicable diseases) between the New World and the Old World.

The celebration of Columbus Day in the United States began to decline at the end of the 20th century, although many Italian-Americans and others, continue to champion it.

A lack of recognition or a reduced level of observance for Columbus Day is not always due to concerns about honoring Native Americans. For example, a community of predominantly Scandinavian descent may observe Leif Erikson Day instead. The practice of U.S. cities’ eschewing Columbus Day to celebrate Indigenous Peoples’ Day began in 1992 with Berkeley, California. Various tribal governments in Oklahoma designate the day as Native American Day, or name it after their own tribe. 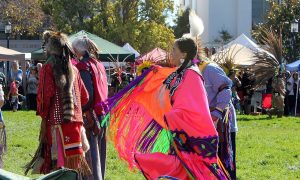 Indigenous Peoples’ Day is a holiday that celebrates and honors Native American peoples and commemorates their histories and cultures. It is celebrated across the United States on the second Monday in October, and is an official city and state holiday in various localities.
It began as a counter-celebration held on the same day as the U.S. federal holiday of Columbus Day, which honors Italian explorer Christopher Columbus. Many reject celebrating him, saying that he represents “the violent history of the colonization in the Western Hemisphere”, and that Columbus Day is a sanitation or covering-up of Christopher Columbus’ actions such as enslaving Native Americans.

Indigenous Peoples’ Day began in 1989 in South Dakota, where Lynn Hart and then Governor Mr. George S. Mickelson backed a resolution to celebrate Native American day on the second Monday of October, marking the beginning of the year of reconciliation in 1990. It was instituted in Berkeley, California, in 1992, to coincide with the 500th anniversary of the arrival of Christopher Columbus in the Americas. Two years later, Santa Cruz, California, instituted the holiday, and in the 2010s, various other cities and states took it up.

Much controversy remains in the school system over Columbus’s legacy and which holiday should be celebrated. Children in schools have been taught about Christopher Columbus as a hero, but the book Rethinking Columbus: The Next 500 Years, presents an argument that children should also be taught about the truth of what Christopher Columbus started and what effect his actions had upon the native people of the Americas. Books like Rethinking Columbus allow students to interpret the history of the Americas in their own way after having multiple perspectives to reflect upon. 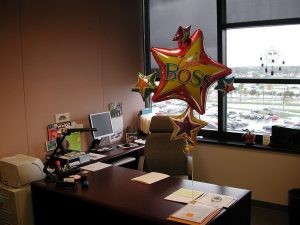 Boss’s Day (also written Bosses’ Day or Boss’ Day) is generally observed on or around October 16th in the United States. It has been pitched as a day for employees to thank their bosses for being kind and fair throughout the year, but some have opposed the concept as nothing more than a meaningless Hallmark Holiday, as well as placing unfair pressure on employees to kowtow to managers who earn more than them and exercise power over them.

Patricia Bays Haroski registered “National Boss’ Day” with the U.S. Chamber of Commerce in 1958. She was working as a secretary for State Farm Insurance Company in Deerfield, Illinois, for her father, at the time and chose October 16, which was her father’s birthday.
The purpose of designating a special day in the workplace is to show the appreciation for her bosses she thought they deserved. This was also a strategy to attempt to improve intra-office relationships between managers and their employees. 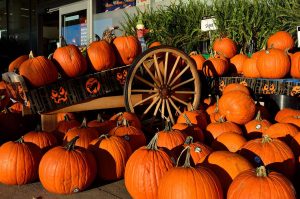 Halloween or Hallowe’en (a contraction of Hallows’ Even or Hallows’ Evening), also known as Allhalloween, All Hallows’ Eve, or All Saints’ Eve, is a celebration observed in many countries on 31 October, the eve of the Western Christian feast of All Hallows’ Day. It begins the three-day observance of Allhallowtide, the time in the liturgical year dedicated to remembering the dead, including saints (hallows), martyrs, and all the faithful departed.

It is widely believed that many Halloween traditions originated from ancient Celtic harvest festivals, particularly the Gaelic festival Samhain; that such festivals may have had pagan roots; and that Samhain itself was Christianized as Halloween by the early Church. Some believe, however, that Halloween began solely as a Christian holiday, separate from ancient festivals like Samhain.

In many parts of the world, the Christian religious observances of All Hallows’ Eve, including attending church services and lighting candles on the graves of the dead, remain popular, although elsewhere it is a more commercial and secular celebration. Some Christians historically abstained from meat on All Hallows’ Eve, a tradition reflected in the eating of certain vegetarian foods on this vigil day, including apples, potato pancakes, and soul cakes.
The word Halloween or Hallowe’en dates to about 1745 and is of Christian origin. The word “Hallowe’en” means “Saints’ evening”. It comes from a Scottish term for All Hallows’ Eve (the evening before All Hallows’ Day). In Scots, the word “eve” is even, and this is contracted to e’en or een. Over time, (All) Hallow(s) E(v)en evolved into Hallowe’en. Although the phrase “All Hallows'” is found in Old English “All Hallows’ Eve” is itself not seen until 1556. 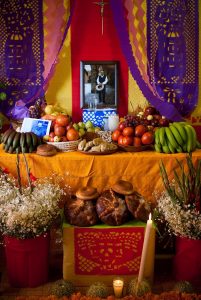 The Day of the Dead (Spanish: Día de Muertos) is a Mexican holiday celebrated throughout Mexico, in particular the Central and South regions, and by people of Mexican heritage elsewhere. The multi-day holiday involves family and friends gathering to pray for and remember friends and family members who have died, and helping support their spiritual journey. In Mexican culture, death is viewed as a natural part of the human cycle. Mexicans view it not as a day of sadness but as a day of celebration because their loved ones awaken and celebrate with them.

The holiday is sometimes called Día de los Muertos in Anglophone countries, a back-translation of its original Mexican name, Día de Muertos. It is particularly celebrated in Mexico where the day is a public holiday. Prior to Spanish colonization in the 16th century, the celebration took place at the beginning of summer. Gradually, it was associated with October 31, November 1, and November 2 to coincide with the Western Christian triduum of Allhallowtide: All Saints’ Eve, All Saints’ Day, and All Souls’ Day.

Traditions connected with the holiday include building home altars called ofrendas, honoring the deceased using calaveras, aztec marigolds, and the favorite foods and beverages of the departed, and visiting graves with these as gifts. Visitors also leave possessions of the deceased at the graves. 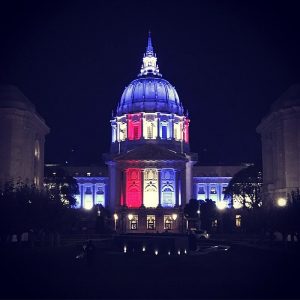 This is the most important election in our country’s history.  It will determine how we, our children their children will spend the rest of their lives.           Please VOTE.

For federal offices (President, Vice President, and United States Congress) and all gubernatorial offices (except in Kentucky, Louisiana, Mississippi, New Jersey, and Virginia), Election Day occurs only in even-numbered years. Presidential elections are held every four years, in years divisible by four, in which electors for President and Vice President are chosen according to the method determined by each state.

Elections to the US House of Representatives and the US Senate are held every two years; all Representatives are elected to serve two-year terms and are up for election every two years, while Senators serve six-year terms, staggered so that one third of Senators are elected in any given general election. Terms for those elected begin in January the following year; the President and Vice President are inaugurated (sworn in) on Inauguration Day, which is usually on January 20.

Most states award all their electoral votes to the individual who wins a majority or plurality of that state’s popular vote, although two states award electors by congressional districts. The vice president is selected in a similar manner, though a contingent election will be held in the United States Senate if no individual receives a majority of the vice presidential electoral vote.

Note – Some of the above material is from Wikipedia, which has more extensive articles re: each holiday/event.