Publisher’s Note – We are approaching July 4th, Independence Day.  In all of my years I have never seen a more disturbing approach to celebrating our great nation.  It is time for all Americans to decide what they can do to make sure that our great Republic stands. 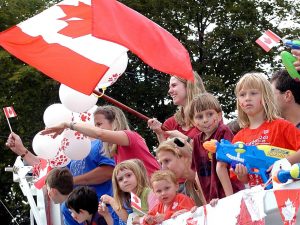 Canada Day (French: Fête du Canada) is the national day of Canada. A federal statutory holiday, it celebrates the anniversary of July 1, 1867, the effective date of the Constitution Act, 1867 (then called the British North America Act, 1867), which united the three separate colonies of the Province of Canada, Nova Scotia, and New Brunswick into a single Dominion within the British Empire called Canada. Originally called Dominion Day (French: Le Jour de la Confédération), the holiday was renamed in 1982, the year the Canada Act was passed. Canada Day celebrations take place throughout the country, as well as in various locations around the world, attended by Canadians living abroad.

Canada became a “kingdom in its own right” within the British Empire commonly known as the Dominion of Canada. Although still a British colony, Canada gained an increased level of political control and governance over its own affairs, the British parliament and Cabinet maintaining political control over certain areas, such as foreign affairs, national defense, and constitutional changes.

Canada gradually gained increasing independence over the years, notably with the passage of the Statute of Westminster in 1931, until finally becoming completely independent with the passing of the Constitution Act, 1982 which served to fully patriate the Canadian constitution.
Canada’s centennial in 1967 is often seen as an important milestone in the history of Canadian nationalism and in Canada’s maturing as a distinct, independent country, after which Dominion Day became more popular with average Canadians. Into the late 1960s, nationally televised, multi-cultural concerts held in Ottawa were added and the fête became known as Festival Canada. After 1980, the Canadian government began to promote celebrating Dominion Day beyond the national capital, giving grants and aid to cities across the country to help fund local activities. 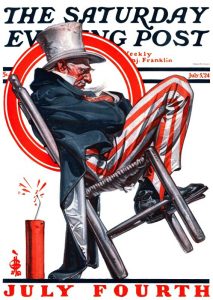 Independence Day (colloquially the Fourth of July or July 4th) is a federal holiday in the United States commemorating the Declaration of Independence of the United States, on July 4, 1776. The Continental Congress declared that the thirteen American colonies were no longer subject (and subordinate) to the monarch of Britain, King George III, and were now united, free, and independent states. The Congress had voted to declare independence two days earlier, on July 2, but it was not declared until July 4.

Independence Day is commonly associated with fireworks, parades, barbecues, carnivals, fairs, picnics, concerts, baseball games, family reunions, political speeches, and ceremonies, in addition to various other public and private events celebrating the history, government, and traditions of the United States. Independence Day is the national day of the United States.

During the American Revolution, the legal separation of the thirteen colonies from Great Britain in 1776 actually occurred on July 2, when the Second Continental Congress voted to approve a resolution of independence that had been proposed in June by Richard Henry Lee of Virginia declaring the United States independent from Great Britain’s rule. After voting for independence, Congress turned its attention to the Declaration of Independence, a statement explaining this decision, which had been prepared by a Committee of Five, with Thomas Jefferson as its principal author. Congress debated and revised the wording of the Declaration, finally approving it two days later on July 4. A day earlier, John Adams had written to his wife Abigail:

“The second day of July 1776, will be the most memorable epoch in the history of America. I am apt to believe that it will be celebrated by succeeding generations as the great anniversary festival. It ought to be commemorated as the day of deliverance, by solemn acts of devotion to God Almighty. It ought to be solemnized with pomp and parade, with shows, games, sports, guns, bells, bonfires, and illuminations, from one end of this continent to the other, from this time forward forever more.”

Adams’s prediction was off by two days. From the outset, Americans celebrated independence on July 4, the date shown on the much-publicized Declaration of Independence, rather than on July 2, the date the resolution of independence was approved in a closed session of Congress.

Historians have long disputed whether members of Congress signed the Declaration of Independence on July 4, even though Thomas Jefferson, John Adams, and Benjamin Franklin all later wrote that they had signed it on that day. Most historians have concluded that the Declaration was signed nearly a month after its adoption, on August 2, 1776, and not on July 4 as is commonly believed.

By a remarkable coincidence, Thomas Jefferson and John Adams, the only two signatories of the Declaration of Independence later to serve as presidents of the United States, both died on the same day: July 4, 1826, which was the 50th anniversary of the Declaration, Jefferson even mentioning the fact. (Only one other signatory, Charles Carroll of Carrollton, survived them, dying in 1832.) Although not a signatory of the Declaration of Independence, James Monroe, another Founding Father who was elected as president, also died on July 4, 1831. He was the third President who died on the anniversary of independence. Calvin Coolidge, the 30th president, was born on July 4, 1872; so far he is the only U.S. president to have been born on Independence Day.

• In 1777, thirteen gunshots were fired in salute, once at morning and once again as evening fell, on July 4 in Bristol, R.I.. An article in July 18, 1777 issue of The Virginia Gazette noted a celebration in Philadelphia in a manner a modern American would find familiar: an official dinner for the Continental Congress, toasts, 13-gun salutes, speeches, prayers, music, parades, troop reviews, and fireworks. Ships in port were decked with red, white, and blue bunting.

• In 1778, from his headquarters at Ross Hall, near New Brunswick, N.J., General George Washington marked July 4 with a double ration of rum for his soldiers and an artillery salute (feu de joie). Across the Atlantic Ocean, ambassadors John Adams and Benjamin Franklin held a dinner for their fellow Americans in Paris, France.

• In 1779, July 4 fell on a Sunday. The holiday was celebrated on Monday, July 5.
• In 1781, the Massachusetts General Court became the first state legislature to recognize July 4 as a state celebration.

• In 1783, Salem, N.C., held a celebration with a challenging music program assembled by Johann Friedrich Peter entitled The Psalm of Joy. The town claims to be the first public July 4 event, as it was carefully documented by the Moravian Church, and there are no government records of any earlier celebrations.

• In 1870, the U.S. Congress made Independence Day an unpaid holiday for federal employees.

• In 1938, Congress changed Independence Day to a paid federal holiday.

• The night before the Fourth was once the focal point of celebrations, marked by raucous gatherings often incorporating bonfires as their centerpiece. In New England, towns competed to build towering pyramids, assembled from barrels and casks. They were lit at nightfall to usher in the celebration. The highest were in Salem, Mass., with pyramids composed of as many as forty tiers of barrels. These made the tallest bonfires ever recorded. The custom flourished in the 19th and 20th centuries and is still practiced in some New England towns.

• A salute of one gun for each state in the United States, called a “salute to the union,” is fired on Independence Day at noon by any capable military base.

• New York City has the largest fireworks display in the country, with more than 22 tons of pyrotechnics exploded in 2009. It generally holds displays in the East River. Other major displays are in Seattle on Lake Union; in San Diego over Mission Bay; in Boston on the Charles River; in Philadelphia over the Philadelphia Museum of Art; in San Francisco over the San Francisco Bay; and on the National Mall in Washington, D.C.

• During the annual Windsor–Detroit International Freedom Festival, Detroit, Mich., hosts one of the largest fireworks displays in North America, over the Detroit River, to celebrate Independence Day in conjunction with Windsor, Ontario’s celebration of Canada Day.

• Held since 1785, the Bristol Fourth of July Parade in Bristol, R.I., is the oldest continuous Independence Day celebration in the United States. 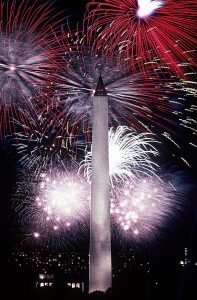 Since 1868, Seward, Neb., has held a celebration on the same town square. In 1979 Seward was designated “America’s Official Fourth of July City-Small Town USA” by resolution of Congress. Seward has also been proclaimed “Nebraska’s Official Fourth of July City” by Governor James Exon in proclamation. Seward is a town of 6,000 but swells to 40,000+ during the July 4 celebrations.

• Since 1959, the International Freedom Festival is jointly held in Detroit, Mich., and Windsor, Ontario, during the last week of June each year as a mutual celebration of Independence Day and Canada Day (July 1). It culminates in a large fireworks display over the Detroit River.

• The famous Macy’s fireworks display usually held over the East River in New York City has been televised nationwide on NBC since 1976. In 2009, the fireworks display was returned to the Hudson River for the first time since 2000 to commemorate the 400th anniversary of Henry Hudson’s exploration of that river.

• The Boston Pops Orchestra has hosted a music and fireworks show over the Charles River Esplanade called the “Boston Pops Fireworks Spectacular” annually since 1973. Canons are traditionally fired during the 1812 Overture. The event was broadcast nationally from 1991 until 2002 on A&E, and since 2002 by CBS and its Boston station WBZ-TV. WBZ/1030 and WBZ-TV broadcast the entire event locally, and from 2002 through 2012, CBS broadcast the final hour of the concert nationally in primetime.

• The national broadcast was put on hiatus beginning in 2013, which Pops executive producer David G. Mugar believed was the result of decreasing viewership caused by NBC’s encore presentation of the Macy’s fireworks. The national broadcast was revived for 2016, and expanded to two hours. In 2017, Bloomberg Television took over coverage duty, with WHDH carrying local coverage beginning in 2018.

• On the Capitol lawn in Washington, D.C., A Capitol Fourth, a free concert broadcast live by PBS, NPR and the American Forces Network, precedes the fireworks and attracts over half a million people annually.