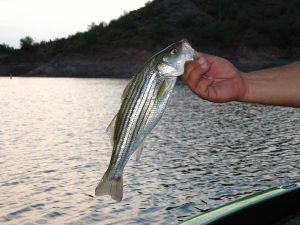 Even if you have to brave the desert heat to fish, it pays to get out on your nearest lake this time of year. Warmer water means active fish, and active fish eat more. Even on the desert lakes, don’t make the mistake of thinking that you have to use finesse baits in deep water to be successful – there are always some shallow fish to be had, especially early in the morning and just before dark.

Ben Koller of www.thehookupoutfitters.com likes to go after all kinds of fish with a fly rod. The stripers at Lake Pleasant willingly gobble up flies, and so do largemouth bass. Crappie and bluegills will also take a fly, and some people even use them for carp.

Koller isn’t a purist, so first thing in the morning he’ll usually throw a topwater lure and see if he can get some action. A Zara Spook is just about everybody’s favorite topwater at Pleasant, and Ben is no exception. Sometimes he doesn’t even have to leave the ramp before he starts getting the big stripers to come up.

Stripers Are Saltwater By Nature

Ben says that in the summer a lot of fish stay in the thermocline, which is always at 30 feet at Pleasant in the summer. But early and late they come up shallow. “Stripers are saltwater fish by nature,” says Koller, “so they are designed to roam and that makes them hard to pattern.” The only places that will consistently hold stripers are areas with lots of bait fish.

Once a striper hits about six or seven pounds it turns into a rogue, loner fish. Smaller stripers tend to school, and when you get into a school of feeding stripers you’ll likely catch a bunch that are all about the same size. If Ben is guiding two fly fishermen he’ll stand up front and throw a Spook to tease the stripers into coming up for the flies.

Koller recommends a nine weight rod (Orvis makes a really good one) for big surface flies, and he uses weight-forward floating line with a 10-foot leader of 16- to 20-pound mono. If they stop eating on top, he switches to a six weight and 200 grain sinking line. This line sinks about five inches per second, so he can count his flies down pretty easily.

The stripers at Pleasant have been pushing sunfish into the brush, so Ben likes bluegill imitations. If they are after fry he uses smaller streamers. Ben also catches largemouth bass on flies. “Traditionally, fly rods are nine feet long,” he says, “but the fly rod manufacturers have discovered that they have a huge market of bass fishermen out there. Most bass tournaments don’t allow rods longer than eight feet, so there are starting to be a lot of 8-foot fly rods available now.”

One of the things he likes about stripers and whites on a fly rod is how fast you can flip the lure from place to place. “When they are busting all around you, you can lift it and put it on the other side of the boat immediately. You don’t have to reel in and re-cast like you do with a regular rod and reel.” He’s found that with the stripers, the faster you can retrieve it the better they like it. He strips line just as fast as he can, giving it five or six good strips, then pausing for a second.

“Also, any time you’re throwing a streamer, tie it on with a loop knot. That gives the lure a whole lot more action. They’re not like a crankbait with a bill – they don’t have any built-in action,” he explains.